Termite swarming season in the Philippines

Are you starting to see winged termites or alates, often wrongly referred to as “gamu-gamo“, attracted to light sources in the evenings?  Termite swarming or synchronized flight occurs in different times of the year but the peak coincide with the onset of the rainy season in the Philippines, which is more pronounced in Metro Manila and most of Luzon but less in Mindanao where rainfall is most evenly distributed.  The timing is species-specific and not only depends on the season and local weather, but the condition of individual colonies as well.

It is not just the alates, which become the founders (queens and kings) of new colonies, that are involved in this phenomenon.  Workers make the openings where the alates would emerge from the ground or mound, while the soldiers guard against predators.  As you may have witnessed for yourself, predators such as the house lizards or butiki seen around porch lights would be getting a windfall of nutritious meals during these evenings. 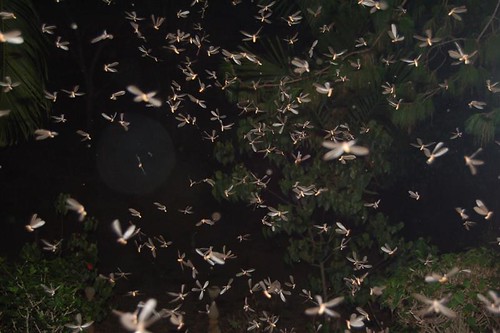 Termite alates fly in swarms so that males and females from nearby colonies find each other. Photo courtesy of Ganesh- B.R. Hills.

Swarming is a strategy for termites not only to make it possible for males and females from a wide area to find each other but also to overwhelm predators such that even if 99% of the swarming individuals end up as a meal for reptiles, birds and other insects, enough would escape and survive to establish new colonies.  Upon landing, losing their wings and pairing, the queen and king would scamper away to locate a suitable place to start a colony together.  Read about the phenomenon of swarming and activities brought about by the onset of rain in the Philippines in this article.

Unlike strong fliers like moths, bees and dragonflies, winged termites fly clumsily over short distances so colonies would be established around the same area.  Therefore, swarming is one of the indicators that termite infestation may be expected in the house and the vicinity.